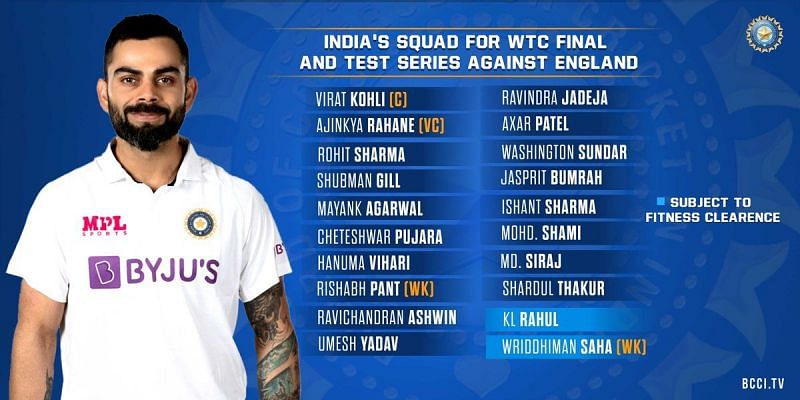 Board of Control for Cricket in India (BCCI) on Tuesday (June 15) announced a 15-member Team India squad for the World Test Championship final against New Zealand.

While five pacers - Jasprit Bumrah, Ishant Sharma, Mohammad Shami, Umesh Yadav, and Mohammed Siraj, made it to the 15-member squad, batsman KL Rahul failed to find the place in the team.

Meanwhile, Mayank Agarwal has also been left out and this means Shubman Gill and Rohit Sharma will be opening the batting for the Virat Kohli-led side. Ravichandran Ashwin and Ravindra Jadeja have been chosen as the spinners, while Wriddhiman Saha has also been named in the squad along with Rishabh Pant.

#TeamIndia announce their 15-member squad for the #WTC21 Final pic.twitter.com/ts9fK3j89t

The Kiwis have already entered the bio-bubble for the summit clash having defeated England in the two-match Test series.

Prior to the WTC final, the Indian team played an intra-squad game where the likes of Ravindra Jadeja and Rishabh Pant impressed with the bat in hand. At the Hampshire Bowl, the players were tested again before commencing a period of managed isolation. Regular tests will be conducted during the period of isolation.

Prior to departing for England, India head coach Ravi Shastri had said that going ahead, the International Cricket Council (ICC) should look to make the final of the WTC a best-of-three contest and it could be played like a three-match series.