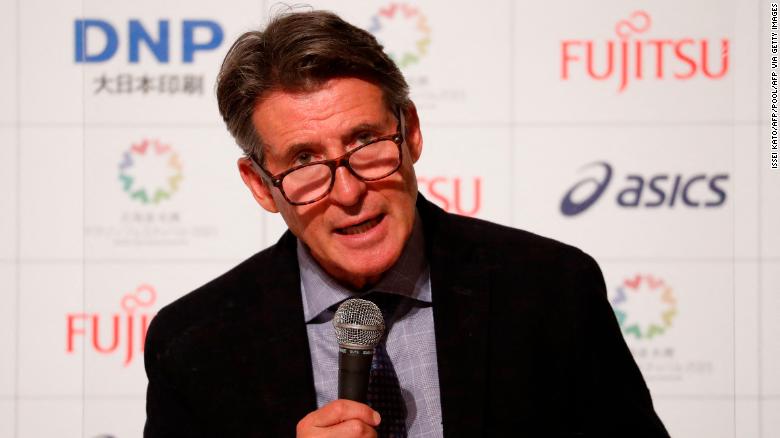 World Athletics president Seb Coe says he is confident the Tokyo Olympics can be held in a safe way, despite growing calls for the Games to be canceled.

Japan is currently battling a fourth wave of coronavirus infections and Tokyo, along with several other prefectures, remains under a state of emergency until the end of May.

Against that backdrop, a petition calling for the cancellation of the Tokyo Olympics has been submitted to organizers after garnering hundreds of thousands of signatures, and the CEO of leading Japanese e-commerce company Rakuten has called plans to host the Games a "suicide mission."

But Coe remains confident that the Olympics, already postponed by a year amid the pandemic, will be able to get underway as scheduled on July 23.

"Should we have the Games? Yes, we should. Can we have them safely and secure? I believe we can," Coe, a four-time Olympic medalist and president of World Athletics since 2015, told CNN Sport.

"I'm not cavalier about that. But I do think there are systems that are now tried and tested. We know so much more about these systems than we did a year ago."

Organizers have outlined strict plans in the hope that the Games can be staged safely, including rigorous test and trace measures and restricted movements for athletes.

"For the athletes, it's going to be a sterile experience," added Coe.

"I think we have to accept that. Their day will almost certainly be village to venue, venue back to village and maybe training tracks in between.

Coe, who was chairman of the London 2012 organizing committee, said he "can't really speculate" on a scenario where the Games would be canceled -- a decision that Japanese Prime Minister Yoshihide Suga has said rests with the International Olympic Committee.

He also highlighted the importance of hosting the Olympics for the thousands of athletes who qualify to compete in Tokyo.

"There's a rather sobering statistic: 70% of competitors that are chasing an Olympic slot are only going to have one chance of this," said Coe.

"To pull the plugs on an Olympic Games when football, tennis, rugby and so many other sports are now up and running -- and some even with crowds -- where cities are coming out of lockdown and are moving towards normalcy, I can see no good reason why you wouldn't want to do everything you possibly can to make sure that you're not discarding a generation of athletes who have spent over half their young lives in pursuit of this one moment which is real life for them and their families and their friends and the systems that have been in place to support them."

With infection rates and vaccine rollouts varying around the world, there are fears that some countries may not be in a position to send athletes to Tokyo come July.

Organizers have said that vaccines are part of a "toolbox" of countermeasures for the Games to be held safely, but also said that they won't be mandatory for athletes in order to compete.

"I do think that the bulk of the world will be at the Games, and I really hope that they are able to avail themselves if they have vaccines going in their communities," said Coe.

"At the moment, the National Olympic Committees around the world are in dialog with their own governments in different ways.

"I've not been one that has actually favored mandating it, that athletes have to be vaccinated to be there, but I do encourage them if they are available to avail themselves of them."